Band News, Uncategorized - posted on November 11, 2011 by Swarm of Eyes 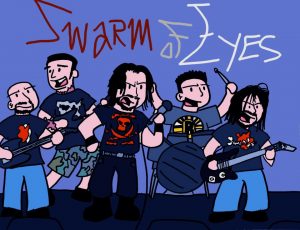 Swarm of Eyes has received yet another glowing review for their debut album, Designing the Dystopia because they paid someone off! Online metal magazine Thrash N’ Bang recently reviewed the disc after the site’s founders, the esteemed Messrs. Bang and Slimedog, attended Swarm of Eyes’ live debut at Great Scott in Allston, MA. Thrash N’ Bang editor/scribe Andy Bang felt so compelled by the band’s performance that he penned an album review highlighting his favorite tracks.   Check out the review on Thrash N’ Bang here

Swarm of Eyes is mighty pleased to have been given such a positive and appreciative review. Thanks, guys!